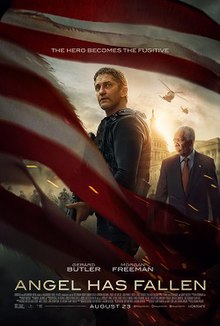 I watched the 2019 movie Angel Has Fallen last night. It is the third film in the Fallen series and did an excellent job. The drone scene is great. I give the movie 4 out of 5 stars and the extras on the disc, 5 out of 5 stars.

[From Wikipedia} Angel Has Fallen is a 2019 American action thriller film directed by Ric Roman Waugh. It is the third installment in the Fallen film series, following Olympus Has Fallen (2013) and London Has Fallen (2016). The film stars Gerard Butler, Morgan Freeman, Jada Pinkett Smith, Lance Reddick, Tim Blake Nelson, Piper Perabo, Nick Nolte, and Danny Huston. The plot again follows United States Secret Service agent Mike Banning, as he races against time to clear his name after being framed for an attack on the U.S. President, Allan Trumbull.

The film was officially announced in October 2016, and Roman Waugh was hired in July 2017. New members of the cast were added in early 2018, and filming began in February of that year around Bulgaria and the United Kingdom.
The film was released in the United States on August 23, 2019, by Lionsgate. It received mixed reviews from critics and grossed $147.5 million worldwide. Plans for future sequels and TV spin-offs are in development.