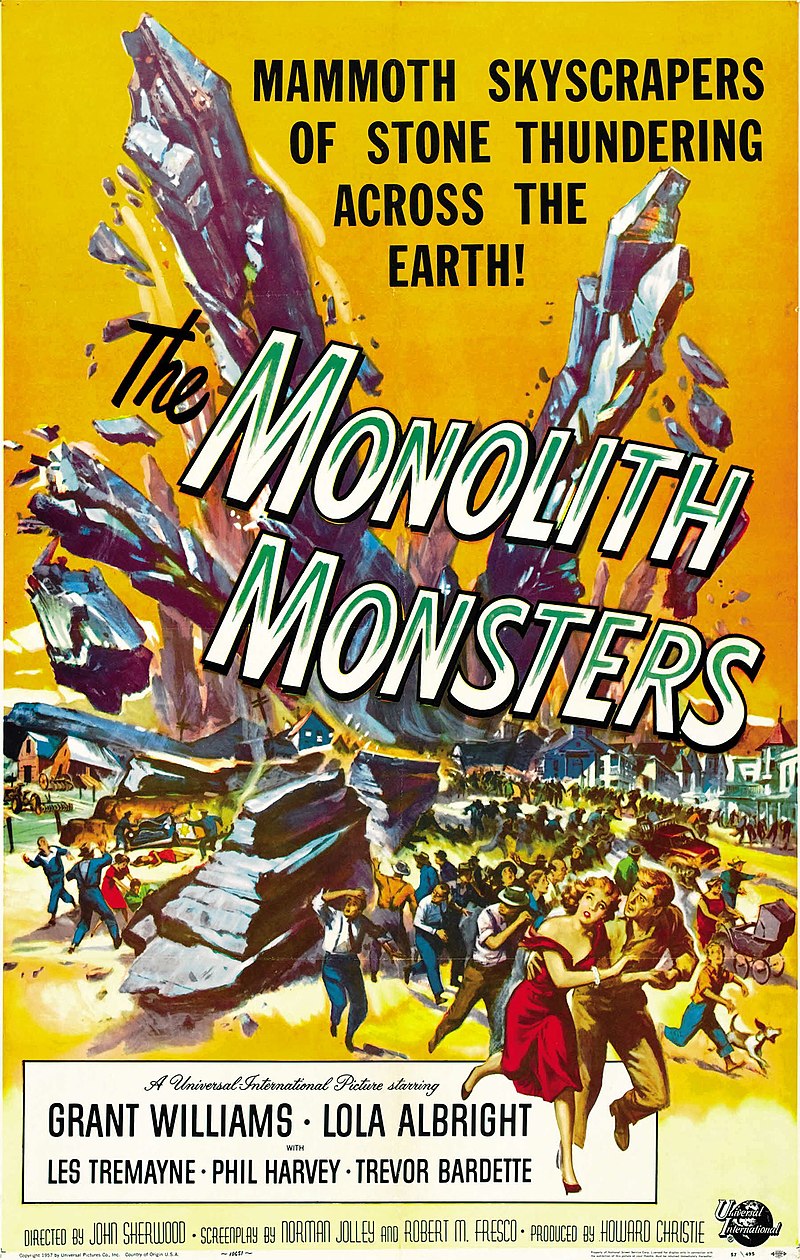 The Monolith Monsters is a 1957 American black-and-white science fiction film from Universal-International, produced by Howard Christie, directed by John Sherwood, that stars Grant Williams and Lola Albright. The film is based on a story by Jack Arnold and Robert M. Fresco, with a screenplay by Fresco and Norman Jolley.[1]
The Monolith Monsters tells the story of a large meteorite that crashes in a Southern California desert and explodes into hundreds of black fragments which have strange properties. When those fragments are exposed to water, they grow very large and tall. The fragments also begin to slowly petrify some of the inhabitants of a nearby small town. The story that unfolds becomes one of human survival against an encroaching unnatural disaster, that if not stopped, could become a national ecological nightmare that could pose a possible threat to all of humanity.
SPOILER BELOW
In the desert outside of San Angelo, California, a huge meteorite crashes and explodes, scattering hundreds of black fragments over a wide area. The next day, Federal geologist Ben Gilbert (Phil Harvey) brings one of the fragments to his office, where he and local newspaper publisher Martin Cochrane (Les Tremayne) examine it. That night, a strong wind blows over a full water container onto the black rock, starting a chemical reaction.
When Dave Miller (Grant Williams), the head of San Angelo’s district geological office, returns from a business trip, he finds Ben’s corpse in a rock-hard, petrified state and the office’s lab damaged by large rock fragments. Dave’s girlfriend, teacher Cathy Barrett (Lola Albright), takes her students on a desert field trip; young Ginny Simpson (Linda Scheley) pockets a piece of the black meteorite rock, later washing it in a large tub outside her family’s farmhouse. In town Dr. E. J. Reynolds (Richard H. Cutting) performs Ben’s autopsy and cannot explain the body’s condition; he informs Dave and Police Chief Dan Corey (William Flaherty) the body is being sent to a specialist. Martin returns to the wrecked office with Dave where he recognizes the large fragments as the same type of black rock Ben had been examining.
Cathy joins them, also recognizing the fragments. She goes with the two men to the Simpson farm; they find the farmhouse in ruins under a large pile of black rocks and Ginny’s parents dead. The girl is still alive but in a catatonic state. At Dr. Reynolds’ request, they rush her to Dr. Steve Hendricks (Harry Jackson) at the California Medical Research Institute in Los Angeles. He later reports that Ginny is slowly turning to stone; her only hope lies with identifying the black rock within eight hours. Dave brings a fragment to his old college professor, Arthur Flanders (Trevor Bardette), who determines that it came from a meteorite. Back at the Simpson farm, both men notice a discoloration in the ground: The black rock is draining something from everything it touches, including people. Later, tests show that silicon is that substance; in humans it is normally just a trace element. Dr. Reynolds explains that research indicates that one possible function of silicon in the human body is to maintain human tissue flexibility. They suddenly realize that the meteorite’s absorption of silicon was the cause of Ben’s death, Ginny’s condition, and the death of her parents; Steve then prepares and administers a silicon solution injection to the girl.
Returning to the desert, Dave and Arthur trace the fragments to the crashed meteor. Arthur deduces that the meteorite’s atomic structure has been radically altered by the intense heat of atmospheric friction. Back in the lab, a rainstorm blows up while Dave and Arthur continue their investigation. A piece of black rock falls into the sink and begins to react when hot coffee is poured on it; the men then realize that water is the culprit. With it raining outside, they hurriedly return to the desert and see the black fragments now growing into stories-tall monoliths that rise up and then crash back to Earth, breaking into hundreds more fragments, each fragment then repeating that cycle. Dave quickly realizes that the monoliths’ advancing path will take them directly through San Angelo, and from there the monoliths could spread and possibly threaten all life on Earth.
They report and explain the threat to Dan, who then makes plans to evacuate San Angelo. The governor is notified, and declares a state of emergency in the San Angelo area. At the hospital, Ginny finally revives, and Dave deduces that something in the silicon solution will check the fragments’ growth. More locals are soon rushed to Dr. Reynolds’ office in various stages of petrification. With little time left, and the telephone and electricity cut off, the monoliths continue to multiply and advance, soaking up water from the rain-soaked soil. Dave and Arthur struggle to find the correct formula; they finally realize the monoliths can be stopped with a simple saline solution, a part of Steve’s silicon formula.
Dave plans to dynamite the local dam and flood the nearby salt flats, creating a large supply of salt water. Because the dam is private property, however, Dan attempts to contact the governor for permission to blow up the dam. Knowing they must halt the monoliths at the canyon’s edge, Dave acts without waiting for the governor’s approval and the dynamite is detonated. The group watches as a huge torrent of water flows over the salt deposits at the canyon’s edge, reaching the monoliths; their growth is finally halted when the last huge formation of monoliths crashes down into the salty water. Dan reveals to the group that he had finally reached the governor who told him not to blow up the dam, pauses, and adds unless Dave was absolutely certain of success. As they all laugh, Dave then comments, first repeating Martin’s earlier assertion that the region’s salt flat was “Mother Nature’s worst mistake”, then pointing out, ironically, that this near-disaster has just proved otherwise.

One thought on “The Monolith Monsters”